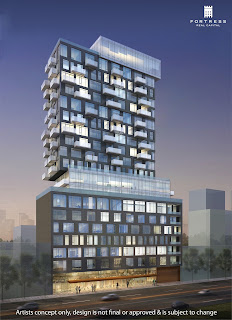 One condo project I've been highly anticipating is the SoBa (South on Bank) by Lamb Developments and Fortress Real Capital, the same team bringing the Gotham to Centretown. I've been going to the Fortress website about every other day to see if there was any news or renderings for this project. More than anything I was interested to see the calibre of design of the project and how it would add to the urban identity of the city.

To my surprise this morning on the Skyscraper forum a thread was finally opened for the project and I have to say the design is beautiful, actually sexy. Ottawa? Sexy? Yes.

Lamb and Fortress are proposing a 19-storey condo at 203 Catherine Street in an area they are coining SoBa (South on Bank). What's most exciting about this project is its location next to Highway 417.

As we all know, when driving into the city from the west end the views of downtown leave much to be desired. Personally I think they're flat out gross and unappealing. Unlike some cities, our city's main landmark, Parliament Hill, isn't visible from a major highway to provide visitors with an introduction to the city before they settle down.

I like what this building would communicate to visitors to the city coming in from the 417. It says, "Vibrant, urban, edgy"- words many people wouldn't associate with Ottawa at the moment.

The location is also appealing because of its proximity to the Ottawa Bus Station which may also be developed if Greyhound leaves the station for greener pastures. If it's built that project would include an urban village with 23 and 19-storey condos, townhomes, and retail and office space. Together these two projects would bring even more life to the area.

Brad Lamb and other Toronto developers coming into the Ottawa market is controversial but I actually see it as a good thing. Some of the best building designs that have been proposed over the past year have come from Toronto developers like Mastercraft Starwood and Urban Capital.

Click here to see the powerpoint presentation of the project.


Kevin Bourne
reinventingottawa.blogspot.com
Posted by Kevin Bourne at 10:14 AM