This past week marked the third anniversary of my move to Ottawa. It feels like my wife and I have been here much longer.

Although the city has grown so much since our move, one thing that we've been missing is Caribbean culture. Yes, there are people from the Caribbean in Ottawa, but obviously not on the level of Toronto. Every once in a while we encounter some expression of Caribbean culture that makes us feel at home, but those experiences are few and far between.

So it was very exciting to hear from my son's daycare teacher that a new Caribbean restaurant had opened up in Orleans at Trim Road and Innes Road.

Friday night we were driving around the city looking for something to eat so we decided to give the new Caribbean restaurant a try. We pulled up and saw the bright yellow sign marked "Bananas".

My wife ordered a stew chicken meal and a glass of mauby while I ordered a chicken roti and ginger beer. Little did we know one of the co-owners' fathers made their drinks from scratch.

I joked with one of the co-owners that they should offer sorrel, typically a Christmas drink, later in the year. Little did I know they'd be offering sorrel all year-round and they had some in the back. I left with a free sample of the festive drink.

The next day I took a friend there to get some food and was welcomed by a steelband and a fairly large crowd. As we entered a DJ was playing reggae music and the place was packed. We ended up not staying to eat because of the crowd, but the whole thing was a welcomed sight. 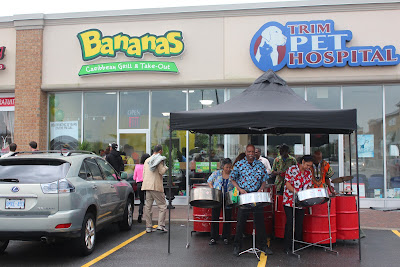 There are other Caribbean restaurants in the city, but unfortunately Caribbean establishments are typically known for poor customer service and subpar dining facilities. Bananas gets top grades for each. Do they have the best food? It's good, but I've tasted some superb West Indian food that they haven't toppped yet. But they're definitely on the right track; it's easier to make changes to a recipe than to cultivate a culture of quality and professionalism. The overall experience at Bananas, including the authentic drinks, decor, and service, is far better than anything I've experienced at a Caribbean restaurant in Ottawa (or Toronto for that matter).

I have to say I'm also quite impressed with the ownership. I don't know them personally, but from my brief interaction with one of them they appear to be capable business people so far.

The opening of this restaurant sends a clear message that Ottawa is changing and becoming increasingly multicultural. It may seem like a small matter, but something like this helps us Caribbean folk to feel just a little more at home in the capital.

I recommend taking the trip to Orleans and taking in what Bananas has to offer, from the food to the authentic drinks. You won't regret it.