VISITING TORONTO:
A Lesson in Urbanism and the Arts

My wife and I recently took some time off work so we decided to visit our families in Toronto. We went to Caribana and celebrated our Caribbean heritage, but the highlight for me was our walk and drive through downtown.

We walked up and down Yonge Street between Yonge-Dundas Square and Front Street and took in the busyness of the men and women in suits rushing home after a day at the office.

One of the things I've disliked about Toronto was how many old buildings they've torn down. There are websites dedicated to the lost buildings of Toronto. Personally, I love modernism and tall buildings, but I also love history and that includes heritage buildings. Modernism and heritage work together to tell the story of where a city has been and where it's going. To my surprise, during our walk and drive I noticed more than ever how many old buildings Toronto still has.

Our drive started along Queen's Quay on the waterfront. I turned right onto Spadina and ended up at a red light at Bremner Avenue. As I looked up at the condos that surrounded me, I couldn't help but think the Dow's Lake area would look like that in a few years.

To the right I noticed a building the City of Ottawa used as an example for the Somerset and Scott Street bridges in the Carling-Bayview LRT Corridor CDP video. 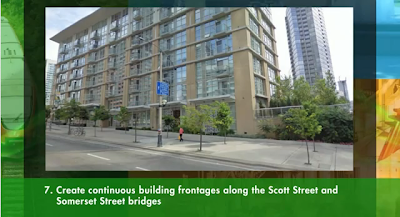 I then ventured past the shops on Queen Street and made a right onto John Street into the entertainment district (this area brought back some memories).

What stood out to me at this point was the number of cultural attractions in downtown Toronto including the Royal Alexandra and Princess of Wales theatres. I then made a right onto King Street West past the Bell TIFF Lightbox and into the Fashion District.

At this point my wife and son were sleeping; that allowed me to drive in silence and really take in what I was seeing (sorry I don't have any pictures- I was driving).

What I noticed the most on King Street West and in the surrounding area was how one-storey retail buildings co-existed with eight to eighteen storey condos (in Ottawa we don't seem to believe they can actually work together without destroying a neighbourhood).

I marvelled at the concentration of artistic attractions in such a small area of downtown Toronto, as well as the amount of national performing arts institutions that aren't in the capital.

I left Toronto convinced more than ever about the important role the arts plays in local and national identity, economic development, and the vibrancy of downtowns. I left Toronto challenged.

I felt that Ottawa could really do with more cultural attractions in its downtown and surrounding urban areas. I felt that Ottawa had the potential to be more of a significant cultural centre in Canada. More than any other city in Canada, we could tack on "national" onto anything we do and it would be appropriate. Also, unlike Toronto and Montreal which are uniligual cities, Ottawa could appeal to both Anglophone and Francophone audiences.

Although I've returned to Ottawa to see headlines of people opposing change, and change appears to be happening slowly, I believe we're headed in the right direction as an urban and cultural centre. The future is full of potential, whether we'll do something with it is yet to be seen.

Kevin Bourne
reinventingottawa.blogspot.com
Posted by Kevin Bourne at 11:28 AM