DC a preview of things to come? 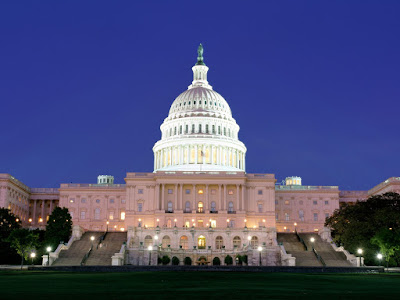 Last week I stumbled onto a tweet from @urbanphoto_blog that caught my attention:"as DC rises, has it displaced chicago as US' "2nd city"? can it become a london-style "proper" capital, rivaling NY?"

The link in the tweet led me to an article in New Geography called "The Great Reordering of the Urban Hierarchy".

The article says second-tier cities like Chicago, Boston and Los Angeles, who are strong nationally but don't yet have a strong international profile, are struggling while Washington DC seems to be replacing Chicago as the United States' second city, partly due to expansion within the federal government (of course there are other reasons). In 2009, Washington DC was rated the top international real estate investment market by the 200-member Association of Foreign Investors in Real Estate, surpassing London, England (AFIRE is based in DC so the results are questionable).

The article goes on to say that DC could soon turn into more of a London type of capital, meaning a dominant, multi-function centre, than a single function government city. I have always loved the European idea of capital cities- multi-function centres like London and Paris - as compared to the North American model where the capital is emasculated by other major cities.

Here's an interesting quote from the article that captures the writer's perspective on what's happening in Washington DC:

"With Washington continuing to soar, we are seeing shifts in the balance of power even with New York, such as the increasing importance of Washington as a media center. Though the inexorable mathematical logic of the budget may crimp Washington at some point, it's certainly not impossible that some time in the future it may take its place as a London-like truly dominant national capital."

Quotes like this make my mouth water. It makes me ask some questions about our capital:

With the current culture in our city it doesn't seem probable, but anything is possible.

Similar to our neighbours to the south, Canada's urban hierarchy is being reordered as we speak. Western cities in British Columbia, Alberta, and Saskatchewan are growing faster than Toronto and Montreal and in the process are gaining political clout. By the end of the decade Calgary will overtake Montreal as Canada's second largest office market after Toronto. Within this reordering of the urban hierarchy, Ottawa-Gatineau is also growing a lot faster than the national average (and faster than larger cities like Montreal).

I believe Ottawa has an even greater role to play in Canada and eventually the world. We've only scratched the surface of what is possible for our city.

Sir Wilfrid Laurier once stated he wanted Ottawa to be the "Washington of the North". I used to hate that statement but seeing where our American counterpart is going, it doesn't sound that bad after all.