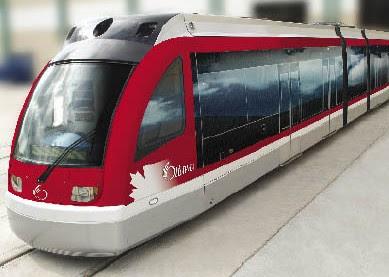 Although I'm a supporter of Ottawa's LRT project, some of the recent events surrounding the plan are rubbing me the wrong way.

The Finance and Economic Development Committee recently voted to move Rideau Station from the edge of the parliamentary precinct to the Rideau Centre and the Byward Market. I'm actually in support of having a station at that location. It makes complete sense.

But I'm also in agreement with people like David Jeanes, president of Transport Action Canada, who believes there needs to be a station at Elgin Street that serves Parliament Hill, Confederation Square, the soon-to-be Elgin Street BIA, the east end of Sparks Street, City Hall, the National Arts Centre, and the east end of the business district, including two new office buildings.

Let's pause to put this into perspective here. According to the Ottawa Light Rail website, the tunnel is expected to have a lifespan of 100 to 120 years. To give you a picture of how long that is, Toronto's subway is only 58 years old. This means I'm not being dramatic in saying this line will serve my children, grandchildren, and great-grandchildren.

My concern is there's no UNDO button somewhere at City Hall that will allow them to go back and correct their mistakes. I just think it's ridiculous that this LRT line could be around for the next 120 years and there won't be a station at such an important part of the city (unless there's a way to add a station in the future). That's the magnitude of this decision.

When I hear the mayor talk about this project, how the city is getting a Chevy and not a Cadillac, it sounds like he's trying to do us taxpayers a favour by staying at $2.1 billion dollars. Yes, the City will be spending $900 million as their share, but is it too much to absorb an additional $40 million for the sake of maybe getting a Lincoln? And setting up future generations of Ottawans to have a better system in the long run?

What would be a shame is if one of the proponents was able to find tens of millions of dollars in savings but the City never took the time to even look into the possibility of another station. If the budget is so precious put the onus on the proponents to determine whether they can deliver the extra station within or fairly close to the budget.

I understand there's a balance that has to be struck here. There's the need to make the project affordable and the need to have a functional system; not just functional in 2012 but functional from 2118 to 2138. That's how far ahead we have to be thinking if the City is correct in estimating a lifespan of 100 to 120 years for the tunnel. How will this exact same line serve Ottawans in the future? Will it still be functional then?

I would never advocate for frivilous spending, especially with the current economic climate, but in my opinion there's a difference between spending and investment.

Joanna Chianello of the Ottawa Citizen is right; this project needs a champion. Rick Chiarelli championed AA baseball. Stephen Blais championed smoking bans. Bob Monette is taking up the cause of businesses on Laurier Street. Is there a councillor who will actually ask tough questions on this file?

Someone better stand up soon before this Chevy becomes a K-car.