The reason I was writing the article was because I saw the community design plan for the area around the future Bayview LRT station. In the picture below you'll see the land uses for the area. The blue area shows that this prime waterfront land is to be "Major Open Space". The video for the plan talked about "preserving the natural environment" which means a whole bunch of empty greenspace. No place to shop, eat or have a drink. 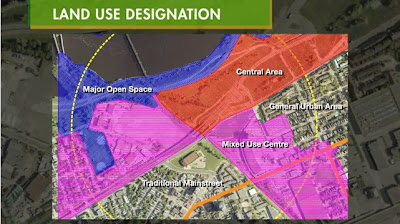 I would've quoted some articles from Project for Public Spaces (PPS) about waterfront development and show that the direction the NCC is taking is wrong.

I was going to show a picture of the Riverwalk in San Antonio, Texas and ask why the Rideau Canal couldn't have just a little development so it could become a shopping, dining and general hang out destination.

Then I would've woke up today and read the lattest blog post by the Ottawa Citizen's David Reevely and felt completely stupid.

So the NCC wants to add some gusto to the shores of the Rideau Canal. They haven't exactly said they'll be development, but hats off to them for waking up and smelling the coffee. I'm upset that my firy blog post and beautiful punch lines will have to be put back on the shelf, but I'm happy the NCC is at least taking a small step in the right direction.

David Reevely was right in saying, "they’re casting a wide net. You never know what you’re going to get back. On the other hand, it’s so wide that it’s pretty hard to figure out what the NCC might possibly consider desirable. A lemonade stand? Actors playing John By’s work crews, telling passersby about their malaria? A skateboarding competition?"

Seeing that the proposals have to be implemented by the Summer of 2012 I doubt we'll be seeing any restaurants or shops. They used some strong NCC language like asking for proposals, actually "pilot projects", that will "enhance the Capital Experience" so we may be seeing a lot of stuff that appeals to all Canadians. Perhaps they'll dump a bunch of lobsters and cod in the canal so people from the Maritimes will feel at home in Ottawa. Only time will tell.

Kevin Bourne
reinventingottawa.blogspot.com
Posted by Kevin Bourne at 7:58 AM