What Capitale BIXI can learn from NYC Bike-Share

When I first moved to Ottawa one of the things I noticed was how many people ride their bikes. It's enough to make you become what I've heard some Ottawans refer to as "those Lance Armstrong wannabees". You know. The ones in those spandex suits.

Although I don't cycle yet, I'm intrigued by bike-share programs and what they do for cities. In looking at the programs of different cities it's amazing to see how small Ottawa's bike-share program is compared to those in other cities. Then again, our city is a lot smaller.

When the NCC/City of Ottawa announced the locations for the bike stations David Reevely of the Ottawa Citizen noted, "We’re still looking primarily at a system for tourists."

So I began to think of what could make the Capitale BIXI program more attractive to residents. I'm not a transportation expert, but my thought was that bike-share stations should be located at major transit stations to become a viable transportation option.

A few weeks ago I came across this article on StreetsBlog.com called "Bike-Share Is Going to Be Huge at NYC Transit Hubs". The article talks about the bike-transit connection and asks the question, "How is the NYC bike share system going to handle New York City’s biggest commuter hubs: Penn Station, Grand Central and the Port Authority Bus Terminal?"

The plan for the Citibank sponsored Citi Bike program to be launched this Summer is to have 180 docks at Penn Station and 140 docks at the Port Authority (together that's more bikes than Ottawa and Gatineau have in their whole system).

The NYC program will be impressive. With 600 stations and 10,000 bikes in Manhattan and Brooklyn, it will be the largest bike-share program in North America. It will be privately sponsored, privately launched and privately operated, with no public funding.

"It’s more than just a different way to get to work. 54% of all trips New Yorkers make are less than two miles. Bike share will make these trips cheap, easy, efficient and fast. Bike share also leverages the city's great mass transit system, extending the reach of transit into areas which aren't easily accessed. Sustainable, convenient, expeditious and safe – Citi Bike will benefit you and your community."

The NYC Department of Transportation also refers to the program as "NYC's new transit option"; clearly their focus is on residents. 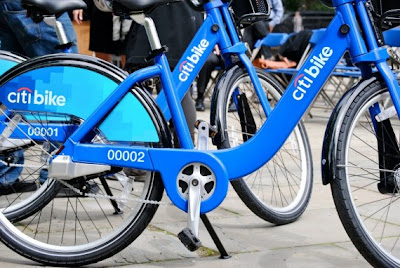 The StreetsBlog article also says Washington DC's Capital Bikeshare, currently the largest in the United States, has 23 docks in front of Union Station and the same number at another station close by. Boston’s North and South Stations have 45 docks each.

Lately I've been using my lunch breaks to take walks down McLeod Street past the Museum of Nature towards Elgin Street, and every time the StreetsBlog article comes back to my mind. When you pass a BIXI station at the Museum of Nature and then pass another one at the McLeod-Elgin intersection a few minutes later, I wonder whether they were placed properly. Again, I'm not a transportation expert or an avid cyclist, but it just seems odd to me considering there are no BIXI stations serving Little Italy, Chinatown, the Glebe, Wellington West, or Westboro, or even our transit hubs like the train and bus stations.

Perhaps the NCC and our municipalities are waiting for the new LRT and Rapibus lines to be completed to connect our transit system and bike-share program and truly make it a part of the city. Until then, subscribing to this tourist-centered service is not even an option for this Ottawa resident.

Kevin Bourne
reinventingottawa.blogspot.com
Posted by Kevin Bourne at 9:12 AM