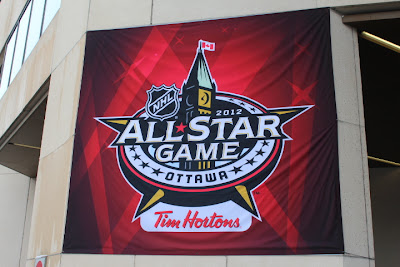 This past weekend was one of the best, if not THE best, weekend I've experienced since moving to Ottawa almost two and a half years ago.

The NHL All-Star festivities brought an excitement to the city that was quite contagious. Even my wife, who doesn't even watch hockey, was caught up in the excitement.

There was something in the air- electricity, a buzz. Like when you walk through Toronto or Montreal and you feel like you're in the middle of something exciting but you can't put your finger on it. In this case I knew what it was- NHL All-Star weekend. I've been asking myself how to make that energy the norm in our city. I think I have a partial answer.

Over the past few months I've been learning about momemtum. I'm not a scientist, but here's what I learned. Momentum, which could loosely be considered a synonym for Velocity, means "force or speed of movement". Momentum is usually triggered by an impetus, or stimulus, that applies force to an object. The more force that's applied to an object is the more speed the object will gain.

Through external forces like gravity, sometimes you can build so much momentum that the object can pick up even more speed on its own. I can push a ball down a hill, which would be the impetus, and eventually the ball picks up even more speed as gravity pulls it. It's also like riding a bike where you peddle hard, build up a lot of energy, and once enough momentum has been created, or through gravity, you can eventually coast and it doesn't require as much energy anymore. That's as far as my limited understanding of science will take me (I was close to failing every science class I've taken).

Outside of the physical, without momentum ideas never get off the ground and plans remain good intentions.

Why is this relevant? Because I believe the NHL All-Star weekend was a very important impetus, or momentum-builder, for Ottawa. For sure, it was a defining moment for the city.

In a few months Ottawa will host the Juno Awards and its week long festivities; another momentum-builder that will carry us into Summer bringing with it Bluesfest and Canada Day. I know our mayor wants to own 2017, but I think we're owning 2012.

I also believe that another key to building this momentum is through homegrown annual events. One-off events visiting your city, like the NHL All-Star weekend, is very good, but having consistent events every year help to sustain the energy all year round goes a long way. A city like Toronto that every year hosts what has become the biggest film festival in the world, the Molson Indy, and Caribana, among other events, can count on these events to sustain the energy in the city.

If Ottawa is going to be a city where the buzz we experienced this weekend is the norm it's going to be up to Bluesfest, Ottawa Fashion Week, the Ottawa International Film Festival, the Capital Hoedown, Canada Day, Nuit Blanche, Ottawa Race Weekend, and whatever other significant events are coming down the pipe (New Year's Eve celebration at Lansdowne Park? Please?)

We had the impetus this weekend and the momentum has started. It's not time to get lazy; it's time to keep adding force and moving forward. It starting to look like Ottawa is owning 2012!