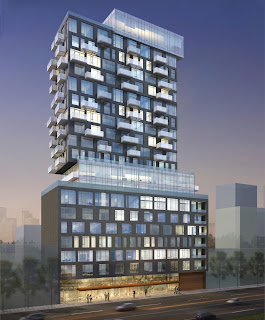 What Urban Capital and Lamb Developments have in common is their relationship with Core Architects.


Core is influencing Ottawa's urban identity conceiving such buildings as East Market, The Mondrian, and Central Phase 1 and if everything goes as planned they'll be adding four more projects to their portfolio in the capital over the next few years.


Waiting in the wings are Urban Capital's Central phases 2 and 3, and Lamb Developments' Gotham and SoBa. I'm personally excited about SoBa because it will bring a brand of architecture to our city that we've never seen before and it will be located in a neighbourhood that has great potential.


With the Lamb projects Core seems to be going in a very cool and trendy direction compared to their previous industrial look for Urban Capital. And with Brad Lamb and his partner Fortress Real Capital looking to scoop up more land we can expect to see more cool and trendy designs from Core Architects in Ottawa.

For those wanting to see Ottawa shed it's boring, mediocre, and small town image, Core's Toronto designs like The Bond, 401 King West, Nicholas, and Seventy5 give us a glimpse into the exciting architecture that may be coming our way.