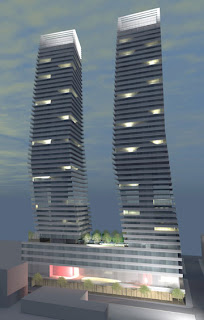 A few weeks ago I wrote a post about a 32-storey condo proposed for Sault Ste Marie. I heard it was approved but haven't been able to confirm that in their city council minutes.

Now Halifax-based United Gulf Developments is proposing Skye- 48-storey twin towers in their city. Before you assume it's just a get rich quick developer, United Gulf has been building in Halifax since 1994.

The towers are meant to resemble a set of twin sails reflecting the city's maritime heritage. These are the most intricate buildings I've seen since the Marilyn Monroe buildings in Mississauga.

Some of the amenities will include a boutique hotel, restaurant, and retail space in the building's podium.

I marvel at how a developer can even propose a 48-storey building in Halifax. I don't know if I'll ever see an Ottawa developer propose 48 storeys in my lifetime the way 35 storeys causes an uproar. I sometimes get frustrated at the ease with which developers can propose and build in other cities. There is an openness to change in other cities that just isn't here yet.

It feels like a slap in the face to those who want to see more density and daring design in Ottawa. Like watching your friend go to prom with the girl or guy of your dreams, while you're going with Plain Jane or Simple Simon. I guess we should just be happy for them.

I wonder if in a few decades ambitious cities like Halifax and Edmonton will become larger urban centres than Ottawa. They are certainly well on their way.