Ottawa a Quality of Life leader in the Americas: FDI Intelligence report 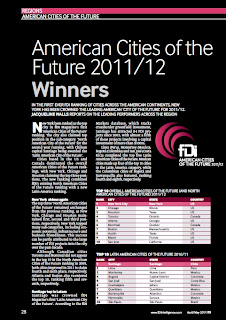 Today I stumbled onto the American Cities of the Future 2011/2012 report by fDi Intelligence published in April/May 2011 which ranks cities within the Americas in a variety of economic categories including Economic Potential, Cost Effectiveness, Human Resources, Infrastructure, Business Friendliness, and Quality of Life.

The report also gives us a summary of fDi's methodology: "Cities of the Future shortlists are created by an independent collection of data by the fDi Intelligence division on 405 cities across North and South America."

Although Ottawa is only mentioned in one category there's reason to be optmistic.

The tables are broken down into four further categories- Major Cities, Large Cities, Small Cities and Micro Cities. Although Ottawa is sometimes referred to as a small town it's included in the Major Cities section reserved for the biggest cities in the Americas. Other cities included in the Major Cities section include New York, Los Angeles, Washington DC, Chicago, Miami, Sao Paulo, Buenos Aires and Mexico City. Canadian cities in this category include Toronto, Montreal, Edmonton, Calgary and Vancouver.

Ottawa placed fifth in Quality of Life in the Americas behind Washington DC, San Francisco, Calgary and Vancouver.


Kevin Bourne
reinventingottawa.blogspot.com
Posted by Kevin Bourne at 11:35 AM