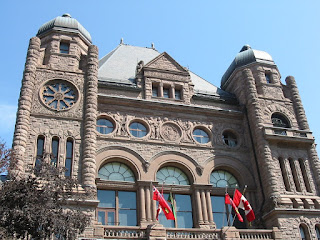 A few weeks ago Chris Drew (@chrisjamesdrew) asked me for my thoughts on a Globe and Mail article about the uploading agreement and the Ontario provincial election titled, "McGuinty courts McCallion in the battle for Ontario's suburbs". The article started by showing that big city mayors are increasingly becoming influencial in provincial politics. Dalton McGuinty was trying to leverage the success of my former mayor Hazel McCallion and Tim Hudak was trying to leverage Mayor Rob Ford's success in breaking the Liberal stronghold in the City of Toronto. The main issue at hand was the PC Party's inability to commit to upholding the current uploading agreement which repays municipalities millions of dollars per year for the downloading of services during the Harris years.

Randall Denley, PC candidate in Ottawa West-Nepean, argued that the province can't afford to continue with the uploading arrangement and that cities should focus on getting their fiscal houses in order.

“The municipalities are disappointed because they’ve been given free money, essentially, from the provincial government...Now reality has hit, and they’re not very happy.”

Now I wouldn't call it "free money" since for years municipalities paid out millions of dollars to provide services downloaded from the province.

I was first introduced to this debate about the uploading agreement when our mayor Jim Watson attended the Association of Municipalities of Ontario (AMO) meeting last month. PC leader Tim Hudak was unable to promise that the current uploading agreement would be upheld. This led to some pretty heated back and forth tweeting between Mayor Watson and PC MMP Lisa McLeod.

"@MacLeodLisa. So will you fight to reverse your leaders policy to not honour this deal that benefits ALL 444 municipalities?"

"@MacLeodLisa he was asked by journalist if he would honour upload agreement and he would not commit! Delegates are not pleased."

The tweets went on for a while.

I've been a conservative supporter since I started voting 13 years ago; I've never voted otherwise even at the provincial level which I find least exciting and with which I'm the least engaged (perhaps odd for someone who was born and raised in the provincial capital). I've volunteered for the federal Conservatives and have worked for a Conservative MP on the Hill. But as someone who is a strong believer in the role that cities are increasingly playing in the national and global economies, this issue created a conflict in my heart. I'm a conservative supporter who would like to see the uploading agreement upheld.

Don't get me wrong, Dalton McGuinty needs to go. He's taxing people ridiculously, raising our provincial debt drastically, and not stewarding the provincial purse responsibly. He has shown himself to be a liar. We need a change in leadership, but putting cities in a bad financial position isn't good policy in my opinion. It's easy to say that municipalities need to get their fiscal houses in order, but cities don't have the legislative tools to put themselves in a good position financially. The current legislative framework, which is outdated, keeps cities dependent on the province.

This points to an even greater issue. Cities aren't valued in Canada the way they are in other countries. Emerging superpowers like China and Brazil are being built on the backs of cities and urbanism while we relegate cities to the backburner.

Because of this issue I considered not voting PC for the first time as a voter. I was really torn. What made it even worse is that economic growth is very important to me and unlike the federal Conservatives, the PC Party hadn't put themselves out there as the group that would bring economic growth to the province. Dalton McGuinty has done a good job of creating that image for himself.

I've met my local PC candidate and saw the sincerity of his heart; he's a really good guy. In our political system you're not only voting for the leader and party but your local candidate. You have to not only think about what's best for the province and city but your community. I'm not going to vote based on this one issue; there are so many factors that need to be considered in choosing a leader (like the track record of the current government), but as a conservative supporter I don't support putting our cities in a bad fiscal position.

I'm going to continue watching this issue closely. I commend Mayor Watson for sticking up for his city and hope we see more of that from him (especially in the City's dealings with the NCC).


Kevin
reinventingottawa.blogspot.com
Posted by Kevin Bourne at 8:51 AM