When I grow up I want to be like Toronto, Part 1 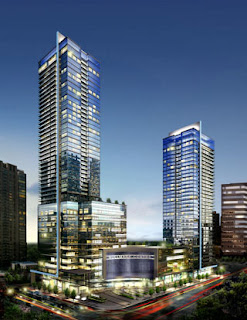 In an article written last November, Mark Sutciffe offered us nine steps to making Ottawa a better place to do business.  I really enjoyed hearing his insights, but one point may have been offensive to Ottawans- "Be more like Toronto".  He went on to say, "when it comes to business, economic development and tourism, Toronto does a lot of things right".  He saw Invest Toronto and a united Chamber of Commerce strategies that may help our city.

As former Torontonians, my wife and I were reflecting yesterday on our time in the GTA.  Although we don't miss much to be honest, except the shopping malls, downtown, and Yorkville, we agreed that Toronto just does things well.  There's an attitude of wanting to be the best and being progressive that I miss.  Larry O'Brien called in "swagger".  People criticized that comment, but I understood what he meant.  Maybe if he unpacked that comment a bit and explained himself it may have been better received.

The sad thing about human nature is that we tend to hate the thing that we're not, and secretly want to be, and Toronto is one of those things. You can't blame cities who know who they are and have begun to progessively move in that direction.  Some people would call that "Convergence".

For the two years before I moved to Ottawa I spent time reading about the city, its plans, the whose who, and its history.  When I got here I spent hours in the Ottawa Room at the downtown library looking at old pictures and reading more about the capital.  I'd say for someone who wasn't born here I have a pretty good grasp on what's been happening here.  At the same time because I didn't grow up here, Ottawa is an open canvass to me with lots of potential and I don't have a lot of preconceived notions.

In my opinion there are some things that Toronto can learn Ottawa, like how to be more family and community oriented, and there are things Ottawa needs to learn from Toronto.  Here are my thoughts.

What Ottawa can learn from Toronto- The Intangibles

There's a Biblical lesson that has helped me to understand organization. "It's the little foxes that spoil the vine" (Song of Solomon 2:15).  What spoils a farmer's crop isn't the big things, it's the little foxes that weisel their way into your harvest, and then soon enough it's hard to get them out.  From growing up in Toronto and now living in Ottawa I can see that there are little foxes that hinder city-building that Toronto has mastered and Ottawa is still in the process of mastering- Lack of identity, lack of vision, and lack of morale.


Lack of identity
I don't mean to cause an offence, but Ottawa has not yet figured out who it is as a city.  Is it a big city?  A small town?  A political capital?  A cosmopolitan centre?  You can hear it in the debates around the city.  Some people want to keep Ottawa as small town, the city they grew up in, while other's want it to evolve.  Some people seem to think it's just a political capital, while others see it as a centre for arts and culture.  Some people think we need for fun, while other's don't think Elgin Street should have patios.

You can say that Toronto, Montreal and Vancouver are in adulthood, while Ottawa is in adolescence.  Adolscence is a time you're still going through puberty, physical and harmonal changes.  It's a time when you're still sorting our who you are as an individual; there's inner conflict about your identity.  There's no debate about who Toronto, Montreal, and Vancouver are; they've passed that stage.

What happens when the city is not clear on its identity is that the people lack identity.  Growing up in Toronto it meant something to be from Toronto.  It gave you an identity and a sense of pride in where you are from.  When I talk to people in Ottawa about this city, especially the 16-30 year olds, I'm met with such as a sense of disatisfaction in how this city is evolving.  There is no collective identity which kills morale.

You can't build properly when there's inner conflict about identity.  When Ottawa goes into adulthood as a city, and there's a general consensus on what this city is, we'll see amazing growth.


Lack of vision
A lack of identity produces a lack of vision.  If you think of yourself as lowly, ugly and plain, you will never see better for yourself.  Your dreams and aspirations will reflect the identity that you feel.  In order to see more you have to be more.  I believe Ottawa's lack of identity has hindered its vision for the future.  When Ottawa stops seeing itself as a boring, government town and starts seeing itself as a world-class, cosmopolitan centre it will produce a greater vision.

Business organizations like the Ottawa Chamber of Commerce have recognized the gap in vision in a recent article in the Ottawa Business Journal.  "'From a vision point of view, we’d like to see – in terms of the investment and economic development in Ottawa – we want to see Ottawa as a global player, diversify its economy beyond federal government and marketed on a global stage,' Ms. Kelly said. 'We’re still looking for that vision.'"

It's the little foxes, the small intangibles that are hindering Ottawa from moving forward- lack of identity, lack of vision, and lack of morale.  I'm starting to see that city-building is as much about these intangibles as it is about building roads, buildings and parks.

You can't budget for building identity, vision and morale.  There's no department or portfolio for these things.  They are free, and it's either you have them or you don't.  Is this what Larry O'Brien meant by "swagger"?  If so, yes, Ottawa needs some.


Kevin Bourne
reinventingottawa.blogspot.com
Posted by Kevin Bourne at 10:07 AM