On January 9th, 2011 the Ottawa media confirmed that a site had been chosen for the Stanley Cup monument.  The Stanley Cup will have a permanent home at the future public square at the Rideau-Sussex intersection.

Personally, I’m still torn on this announcement.  Commemorating such an important event and place in hockey and Canadian history is important and great for tourism, but I’m not sure if it should anchor what will be our main downtown public square at what is arguably the most important intersection in the city.
The NCC is expected to have the public square and monument built for 2017 in celebration of Canada’s 150th birthday and the 125th anniversary of the donation of the cup by Lord Stanley.
I’m excited about what the Rideau-Sussex intersection will look like in six years if it’s done correctly.  But although I’m a big fan of public squares, I don’t think creating a vibrant public square is as easy as putting down concrete tiles, trees and benches.
Will this square really be a vibrant gathering place?  Especially in Ottawa where we don’t seem to like adding a commercial component to our public spaces?  With a population of 2.5 million, Toronto’s Yonge-Dundas Square is often empty partly due to a lack of seating and a lack of consistent programming.

I believe the game-changer for the Rideau-Sussex intersection will be the lot at 41-45 Rideau Street on the north-east corner.  The current building houses a CIBC branch, Holtz Spa, and office space.  In my opinion it is currently the weakest link at the intersection, although most people would say it's the underpass, but it has great potential.  According to my research this building is not a heritage building and it lacks character compared to its neighbour at the south-east corner.
Here’s what I think would make this intersection the destination that it should be.
First, I would demolish the current building at 41-45 Rideau Street in favour of a mixed-use building; let’s call it the Sussex Centre, the perfect companion to the Rideau Centre.  The Sussex Centre would be developed in a way that would make it accessible to the people.  One of my pet peeves is having great buildings that the average person can’t access, for example the Government Conference Centre.  Some of the best views from 41-45 Rideau Street are only available to those working in the offices above.

Let’s go back to the Sussex Centre.  When you enter the building, immediately to the left would be a large entrance to Chapters linking the two properties.  On your right in the distance would be another smaller entrance to Chapters so people can access the Starbucks.  This would allow people to take their coffee across the street to the square and meet up with friends.  The elevator and escalator would take you to the lower level where you would find more stores and facilities, including an OC Transpo retail space, a bike storage facility, and an underground connection to the Rideau Centre and LRT tunnel.
On the upper floors you would find a variety of tenants and spaces, including a food court, restaurant and/or lounge, fitness centre, office space, and roof top terrace that overlook the public square across the street.  There would also be a variety of stores, including some big chain stores not typically available to people living downtown, many of whom don’t have cars.  There could also be some attractions, perhaps an arcade (if teenagers still like that kind of thing), to give our young people something to do and to create a buzz after 5pm.
On the outside, the facade would be rounded.  A multitude of big flashy billboards and video screens wouldn’t be very “Ottawa”, but on the outside of the centre I would consider having one large video screen visible from the public square to enhance its role as a gathering place.  Of course this would cause an uproar, but having a video screen would make the square a gathering place if it aired Sens playoff games, Olympic events, World Cup games, or New Year’s Eve programming.
Toronto’s Yonge-Dundas square also became a gathering place for thousands during the Michael Jackson funeral.  During my trip to Cardiff, Wales I saw how a city much like Ottawa, with similar heritage, size, architecture and culture, used football matches on a video screen to gather people in the public square.  It's funny how many people in North America are strongly opposed to video screens in public places, but they are used in heritage rich Britain. 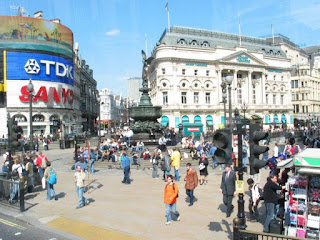 According to the Rideau-Sussex visioning document, the NCC draws inspiration from a Times Square, l’Arc de Triomphe, and Piccadilly Circus in designing this intersection.  With our British roots, the latter would probably be closer to what we can accomplish; an old meets new, heritage meets contemporary type of space.  In one glance you could get a glimpse of where Ottawa has been and where it's going.
A public square will be a great starting point, but I think the game-changer will be the space across the intersection.
Kevin Bourne
reinventingottawa.blogspot.com
Posted by Kevin Bourne at 3:06 PM