A case for an urban square in Centretown 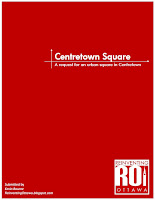 A theme that you notice across Canada is the modern, urban square.  Montreal has Victoria Square, Toronto has Yonge-Dundas Square, and Vancouver has Robson Square.
I can admit that I have a love for European cities, especially the old public squares where you can picture people meeting with friends, having a coffee, stopping after work, or discussing politics or the latest events of the city.
There is a growing trend in urban planning called "placemaking" that champions these kinds of places in our cities.  It seeks to create vibrant, people-friendly places where people can meet and interact with each other and their surroundings.

I have visited Yonge-Dundas Square and Victoria Square and have witnessed the social interactions, and in the case of the prior, the concerts and festivals.  Through the work of the NCC, Ottawa has become a hotbed for commemorative places, but we are desparately lacking in a modern, urban square.


I recently submitted a small package to the City of Ottawa and the NCC building a case for such a square in the CBD in Centretown.  One of the final significant pieces of real estate in the CBD is the parking lot bordered by Kent, Albert and Queen Streets which is currently owned by Brookfield Properties.  This land was a proposed location for another Place de Ville complex for the Federal Government, but I ask the question, "Does Centretown need another Federal Government building?" especially on one of the final remaining significant pieces of land in the area.  This would be a travesty with communities like Orleans asking for a Federal Government presence for years.  The good news is the Federal Government is leaving downtown for cheaper, greener pastures in areas like the Trainyeards.  What does this mean for land use in downtown?
The plight of the CBD is that it is a ghost town outside of the hours of nine to five, Monday to Friday.  Will another office building add vibrancy to our downtown?  The greatest enemy of the business area in Centretown is not the prospect of taller buildings, but a lack of people-friendly places and attractions.  I recently disagreed with a tweet from a fellow Ottawa resident who said that tall buildings are soulless.  I argued that a lack of places for people to gather is more soulless than tall buildings.
In this submission I asked the City and NCC to consider acquiring this land for the purpose of developing a modern, urban square (a first for Ottawa).  While a developer may not hand over such a significant piece of real estate easily, it is worth a try.
Click on this link http://goo.gl/Jr8VC to read the submission.  Let me know what you think.
KEVIN BOURNE
reinventingotttawa.blogspot.com
Posted by Kevin Bourne at 10:14 AM