Is Ottawa a "Carlton" or a "Jennifer Lopez"? 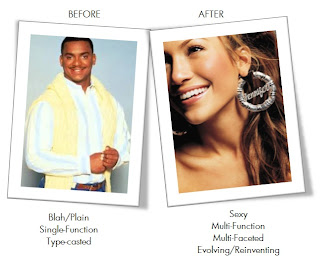 So here's the question, "Is Ottawa a 'Carlton' or a 'Jennifer Lopez'?"  You may ask what could these two figures have in common with Ottawa.  Well they symbolize what our city is and what it has the potential of becoming.

Lately I've been asking myself an interesting question.  After evolving from a lumber town to a political capital, what is the third phase of Ottawa's evolution?  What will it evolve into next?
Over the past few months I've been reading about capital cities around the world, their financial and administrative systems, to understand how Ottawa can better organize itself for the future.  I've looked at the monuments and buildings of capital cities and how the concept of the capital city evolved.  I've even spent hours in the Ottawa Room at the central library to learn more about the humble beginnings of our capital.
I've had my frustrations with our city, mainly how much residents oppose growth and how much further behind we are than the other G8 capitals.  Then it struck me just how young our city is.  You have Rome, Paris and London that have ties to Ancient Rome.  You have Moscow, Tokyo and Berlin that can be traced back to the monarchy in their respective countries.  Then you have Washington DC and Ottawa that are the two youngest siblings.  The other cities in the G8 have had centuries to discover their identity and blossom into what we see today, whereas we're just getting started.
So what's hindering us from moving forward as a city?  Aside from rampant NIMBYism, like Alphonso Ribeiro (aka "Carlton") we've been typecasted.  Sir Wilfrid Laurier, who could be seen as a founding father of the capital, envisioned Ottawa to be a "Washington of the North".  He was a great visionary.  His vision for Ottawa was for a grand place with great national monuments and buildings, a national centre for thought and education.  Organizations like the NCC and NRC have taken this mandate and ran with it.  Today the powers that be in the capital still seem to have Washington envy like a little brother who wants to be just like his older brother when he grows up.  "When I grow up I wanna be just like you Washington!"

Well, this may not be news to you, but Ottawa's just about grown up and we're still not like Washington which provides us with a great opportunity to reinvent ourselves.  The original vision which provided our leaders with focus and discipline in the beginning has now typecasted us into a national role that we can't shake.
The problem with being typecasted is that externally people never want you to leave that role, and internally you either end up having to go to the other extreme to change your image or just simply reinventing yourself like Jennifer Lopez.  She started out as a fly girl on In Living Colour, but she is now an actress, recording artist, model, entrepreneur, wife and mother.  So here's the question again, "Is Ottawa a 'Carlton' or a 'Jennifer Lopez'?"
The North American model of capital cities is different than the European model.  In North America we've chosen to break up the the political and commerical functions by having a Ottawa and Toronto or Washington DC and New York.  In Europe when you are the capital city you are both the political and commercial centre, like London and Paris.  What the prior does is lock you into a role that is hard to leave because growth is limited in the public sector.  What the latter does is give you the space to evolve into whatever you'd like because there is more room for growth and creativity in the private sector.
On the surface Ottawa and Washington DC may seem similar, but when you look below the surface they have their differences.  Ottawa is a bilingual city, culturally inspired by Britain and France giving it a European feel.  A Montreal-born, Washington Post writer described Ottawa as "cosmopolitan" as if to say we have a cultured, international vibe.  Due to the political power of the United States it would be hard for Washington DC to become a multi-funtion centre, but in Ottawa our European roots would allow us to branch out into Fashion, Art, Leisure and Media in a way that Washington DC may not be able.  And because Canada is not yet a political juggernaut, it would be easier for our capital to evolve.
In my generation I want to see Ottawa evolve from a Carlton to a Jennifer Lopez; from a typecasted, single-function city to a sexy, vibrant, multi-fasceted, multi-function, and constantly evolving national gathering place.  In my humble opinion, right now London and Paris are the Jennifer Lopezes on the international stage.  The Federal Government may have a vision for Ottawa to be the Washington of the North which is a viable vision for the parliamentary core, but as residents, entrepreneurs and municipal politicians and staff of the City of Ottawa we can decide to be more.  Over the next 30 years together we should set a goal to become a national centre for more than just politics.  Ottawa is the New London.  Carlton is the New Jennifer Lopez.
Lumber Town.  Political Capital.  Multi-Function Capital.  The process begins.
Kevin Bourne
Posted by Kevin Bourne at 12:31 PM